This article was first published in the April 14, 1961 issue of Life Magazine

In 1961, the drilling barge CUSS I made scientific history when it was used to piece 601 feet into the sea floor to get core samples of the earth’s never-before-penetrated second layer, known as the Mohorovicic Discontinuity or “Moho”.

The CUSS 1 (named for the Continental, Union, Superior, and Shell oil companies that developed it in 1956) was the first drillship in the modern sense of the word. It was equipped with four rotating thrusters, one at each corner, and was the first vessel to use dynamic positioning. Position monitoring was provided by way of submergible sonar buoys in a circular pattern around the vessel, from which it received signals in order to maintain a footprint of approximately 600 feet in diameter.

Author John Steinbeck was onboard and recorded the operation in the article linked above.

2016 – The Cybernetics of Dynamic Positioning in an Historic Perspective

2011 – The year in which Dynamic Positioning celebrated its fiftieth anniversary!

The public learned a lot about offshore operations during the Gulf of Mexico oil spill in 2010, but it was clear they still have much to learn. While a TV news camera showed more than a dozen ships at work in the area over the wild well, the newscaster said a hurricane might be headed that way and all the ships would have to “pull up anchor and head for shore.”

Of course there were no anchored vessels there! Each was a dynamic position (DP) vessel, held in place against wind, waves and current by propellers, which were commanded by computers taking signals from satellites, sonar and compass. The largest was Transocean’s Enterprise, 100,000 long tons with six 7,000 horsepower thrusters. That is dynamic positioning. I followed the spill recovery closely, and never heard DP mentioned. This year is the 50th anniversary of DP, and I was there at the beginning.

It was an exciting time in the early 1960s. Floating vessel drilling had been shown feasible with anchor moored vessels. Walter Munk of Scripps Oceanographic Institute had proposed to the National Science Foundation that drilling in very deep water might allow drilling through the earth’s crust to sample the Mohorovicic discontinuity. Willard Bascom had sold NSF on the idea of mounting thrusters on the CUSS 1 to see if they could hold still enough without anchors to drill without a riser in 11,000 feet of water. Construction was soon begun.

Bill Bates, marine division manager of Shell, had worked with the CUSS group, a consortium of Continental, Union, Shell and Superior oil companies, during development of floating vessel drilling. He also helped critique the Bascom plan and thought it was such a good idea he convinced Shell to build a smaller core drilling vessel for geological oil prospecting. By 1960 it, too, was under construction with Ron Dozier as lead engineer. The vessel was called the Eureka. 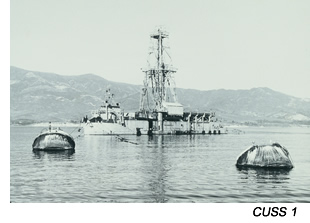 CUSS 1 had been made from an old war surplus YF barge at 3,400 LT displacement. It was to have a 250-horsepower, direct engine-driven thruster mounted near each of its four corners. They were steerable thrusters capable of swiveling through a full circle. Direction and engine speed were to be controlled manually from a central location. A compass measured heading. The thought was that, with manual control, she could hold position inside a 180-meter radius ring of preinstalled buoys either by visual sighting or by sonar measurement, and that would be close enough to allow drilling in deep water.

Eureka was being built from scratch by Shell at the Orange shipyard in Texas. At 400 LT displacement, she was to have two 200 horsepower steerable thrusters electrically driven through the full-speed range. Thruster direction and speed were each to be controlled separately and manually from the bridge. Position was to be viewed as a dot on an oscilloscope provided from a “tiltmeter” measuring the angle of a taut wire having lowered a heavy weight to the ocean floor. Heading was from a gyrocompass. 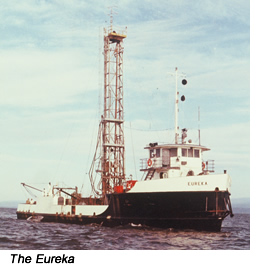 In January 1960, I was called to be Bates’ division engineer. The manual thruster control planned for Eureka began to nag as a growing worry. I soon became convinced that, in our shallower water, the manual control would not work at all. We needed an automatic control system to hold position and heading, but nothing like that existed. It would have to be developed. It was out of this angst that the first concept was born during a hot drive from Ventura to Los Angeles. It was not built like this, but this contraption had all of the features we needed for an automatic DP control system. It was clear the forces had to be combined, as they still are in the systems today.

For a time at Shell I had worked in gas plant process control and was much impressed with the almost miraculous controllers used to control flow, temperature and pressure. Excellent electronic three-mode controllers were becoming available to replace the older pneumatic devices for the process industries. Honeywell had them available off the shelf for $1,500 each. We would use one each to control surge, sway and yaw. In January 1961, we accepted Hughes Aircraft’s offer of $50,000 to build our control machine including the three Honeywell process controllers.

CUSS I began its tests in March 1961. With manual control they were able to hold within a 180-meter radius, and drilled and recovered cores in over 11,000 feet of water off Guadalupe. Recovering over 40 feet of basalt, the tests were deemed highly successful.

Eureka had her new control system installed just before leaving the shipyard. In May1961 she moved to 1,000 feet water in the Gulf of Mexico. After trying for an hour to hold station unsuccessfully with manual control, the automatic system was turned on, the dot on the oscilloscope moved to the center of the screen and held steady. After another hour, during which the automatic system performed flawlessly, drilling was started and cores were successfully recovered as planned.

Eureka was a work horse, drilling as many as nine core locations in a day in water out to 3,600 feet; her anchored competitors could get about one location and in water depths of only around 200 feet. Incidentally it was not a DP system at the start. The Eureka’s crew called it the “Ape.” I thought it was cute, but management prevailed.

After a few new small coring vessels were built, NSF sponsored construction of the Glomar Challenger, built for Scripps for the first internationally supported ocean drilling program. Like the earlier vessels, she drilled with bare drillpipe and no riser or mud circulation. She drilled purely for scientific information, for mapping the earth’s tectonic plates and making many more significant discoveries. Built by General Motors’ Delco division, Challenger was the first to use digital computers to replace the earlier analog systems. 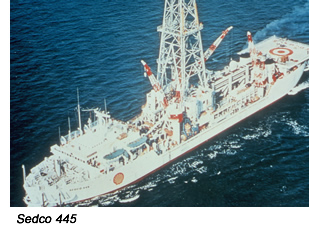 The first DP rig to use a riser and blow out preventer (BOP) for oilwell drilling was the SEDCO 445 built for Shell in 1971. It was followed soon by more and bigger rigs and semis. Many others included pipe lay and construction crane vessels and dive support vessels. DP has even become popular on large cruise ships. It allows them to avoid anchor damage to coral as well as to provide easy maneuvering in harbors and channels. Water depth records continue to fall, and big new rigs rated for 12,000 feet of water cost $600 million. The Japanese have built the CHIKYU with riser, mud circulation and BOP to allow scientific drilling where possibility of encountering hydrocarbons would otherwise prevent drilling without riser. 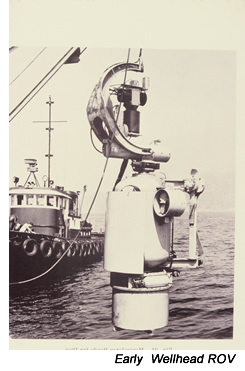 No one knows the number of DP vessels in operation today, but knowledgeable people guess more than 2,000. It has grown to quite an industry. It is gratifying.

DP and ROVs are a Marriage Made in Heaven. They are highly synergistic. Neither could be as valuable or widely used without the other. Together they have made it possible to build vast projects under water that would have been unthinkable without either. It was with the glimmer of this possibility in mind that Shell undertook development of both in the early 1960s along with the drilling capabilities, BOPs and riser that needed both. While we were doing the first DP in 1961we were also making the first ROV-operated wellheads along with the ROVs for drilling support. 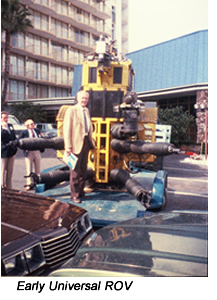 Our first ROV attempts were pathetic compared with the machines of today, but we had one thing they seem to have forgotten about: we had a hydrophone at the ROV so we could hear what was happening below, like the strain of the hydraulic pump or the squeal of a bad bearing. Many times while watching the spill control effort last year in the Gulf of Mexico, I thought how strange it was to see such an obvious roar and feel totally deaf. TV viewers did learn that ROVs are very capable, strong and with stamina. But observant people could also see that they are still clumsier than they should be, and many provide a view that is in poorer resolution and perspective than it should be. There is still room for improvement.